I’m not going to win NaNoWriMo this year. And that’s okay too. 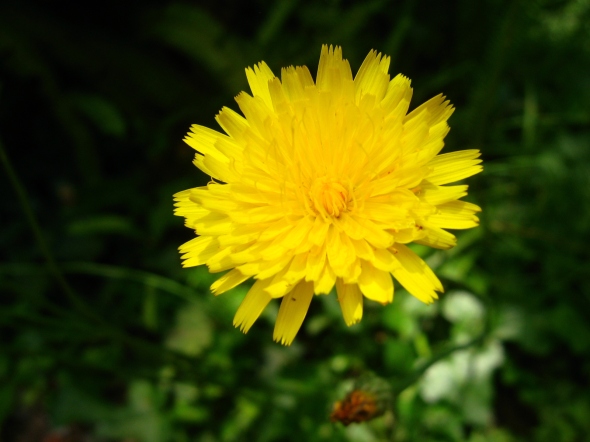 Just a flower that grows outside my door. I guess it’s a weed, but who cares? It’s beautiful.

I wrote this yesterday, so… the dates and things are a bit off.

Last night I came to the point where I had to admit to myself that I was not going to win NaNoWriMo this year. This thought had been nagging at me since the beginning of November and it hugely bothered me. I have a perfect streak of three years in a row and I didn’t want to lose that. A week into NaNoWriMo this year, I could see that this was going to be the hardest NaNo struggle I’ve ever had.

And so it was. But last night I realised that I wasn’t struggling with my novel; I was instead struggling with my own pride. I want that perfect streak because I hate admitting failure. I want that perfect streak, not because I want to write the first draft of yet another novel that’s just going to end up somewhere in the dust, but because I’m too stubborn to recognise when I can’t do something.

Last night I looked at my heartless little statistics counter and decided… It said that I need to write over 5,000 words a day to make it. I decided that I was going to give that word count my best shot and if I made it, the game was still on. If I could write 5,000 words last night, I would continue to endeavour to write 5,000 words every day for the rest of the month and call it a victory. If I couldn’t, then I’m not doing NaNoWriMo any more.

I made it to over 3,000 words before I couldn’t write any more. Then I just sat there and thought about failure. I’ve done this three times before, why couldn’t I do it again? Is it age? I’m 22 now. I was 18 when I first gave it a shot. Has the foolish daring of teenage-hood finally left me and I couldn’t even rise to a challenge any more? Is it a semester’s worth of creative writing classes? For the first three NaNos I’d never had a proper writing class in my life and I could do it. Why couldn’t I do it after writing classes?

Why did I enter for NaNoWriMo this year? I knew what my situation in real life was going to be before I started. I knew that it would be exams, just like every other year. But this year it was post-grad exams, which is a whole different ballgame from my first three years’ exams. I knew that I would still be working on my creative writing portfolio which was due the first week in November. I knew that I would be a NaNoRebel and continue on said creative writing portfolio novel, rather than start a new one. So, why did I still enter? Because at the end of October, I was overcome with fear that I was going to abandon this novel just like I did with all the others. I’d been working on it for a semester and I was afraid that I was going to stop writing again – like I always do. So I thought that if I could finish the draft for NaNoWriMo, maybe this time I would edit the draft and continue working on it.

The draft is not nearly done. I couldn’t nearly meet the challenges necessary for each NaNoWriDay.

Does this mean I failed?

I have 20,000 more words today than I would have had if I had not done NaNoWriMo. Did I try my best? Maybe not. Some days I just procrastinated so much that I didn’t write anything at all, something that never happened before. But why did I procrastinate so much? Because I am tired. I couldn’t work any more.

I’m not really physically tired. I’m a little tired, but mostly I’m mentally tired. This has been an exhausting year. Looking back now, would I have done better had I written through the pain and exhaustion and not allowed myself to just sit and watch YouTube videos? Probably, yes. Would I be a happier, more fulfilled person today*? A resounding no.

I did not fail at NaNoWriMo. NaNo simply didn’t align with my goals this year. That and Rebelling is a lot harder than I thought. It’s like being hit by all the mid-way blues on the very first day. You already have the exposition in place when you’re starting and then you have to struggle through endless plot devices and the horrible mind of your villain. You forget the stuff you already said because you worked on that stuff over a period of six months. You struggle to write fast because you crafted and edited the first part so carefully at a pace of 1,500 words a week and then you got to class and got feedback and went home and edited it again.

A lot of things have changed since last night. I see NaNoWriMo from a new angle. Success and failure doesn’t live and die on the winner’s certificate and little purple bar any more. What’s more important is personal growth and happiness. If those are present there can be no failure.

*A story that not many of you know is that I was going to study Law after high school. I was going to apply for it. I didn’t want to, but I saw no other options. I had no idea what I wanted from life. I knew I wanted to write, but I also knew I couldn’t dare for a degree in creative writing. At the last moment, I had to make the craziest decision of my life. I chose happiness over money. I applied for Languages instead. I wasn’t good at languages, but I knew deep in my heart that I would be unhappy in law. I also knew that I would make more money in Law than in Languages. I couldn’t face that unhappiness. That was four years ago. I decided that if it was the wrong choice, I was still going to make it count. Maybe I will regret the lack of money choice later, but I’m going to make damn sure to devote my life to being happy, living for what I want to do, not race after unattainable things and still be practical.

Who knows, maybe there is an Elana in a parallel universe well on her way to becoming a lawyer today (though I’m more inclined to think I would have dropped out). Maybe she’s doing that, but I’m sure she isn’t happy. I am happy.

So, how is others’ writing going? Are you about to win NaNoWriMo? Or did everything not exactly go according to plan?

I hope all those of you who are celebrating Thanksgiving enjoy it and that all of you (Thanksgiving or not, NaNoWriMo or not) are happy. 🙂

PS. Yes, I’m finally back. I have lots of other news to talk about, but I’ll make a separate post for that!

This entry was posted on November 27, 2013 by Elana. It was filed under NaNoWriMo and was tagged with creative writing, nanowrimo, national novel writing month, procrastination, real-life pics, writing.