Hi! I’m back (again) and I really hope that my three weeks of internet and computer frustration are now finally over. But more on that below. As we had all of this trouble getting our internet connection fixed, I needed some way to vent my frustration at this process. So what better way than a cartoon? I hope you enjoy (and that my actual point isn’t too vague). 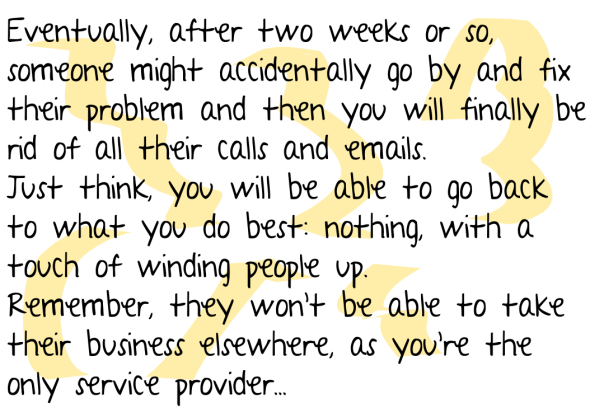 So, yes, I just had two and a half weeks of internet frustration and then, after it was fixed, a further half week of computer frustration. It’s an extremely long story, but it basically goes like this: we discover that both our internet and landline is dead. We report it, a support guy comes out quite promptly, tinkers with a few things, pronounces that the fault lies with the underground cables and he only works with overground cables. He promises to pass it on to the right people and disappears. We go through a few more days of silence before my father gets angry and calls the call centre (while complaining about cell phone costs) and gets told that “we are aware of the problem and we are working on it”. Several more days pass and university starts and I need to register online and email lecturers (Is it just me, or is emailing lecturers really awkward?) and find books online and my father gets angrier and angrier. And bored also, I suspect. He confronts a poor innocent girl at the service provider and finally finds out that there has been a massive cable theft and our line is one of the affected ones, which is why it is dead. They don’t know how long it is going to take them to replace all of those cables. He doesn’t believe her and thinks the fault must be something else and that they are just incompetent and that makes us annoyed at each other because I feel we need to believe her because I’m gullible and I always need to believe the best of people (and expect the worst because I’m a cynic also).

We sent emails with my expensive 3G internet (seriously, I’m broke now), we called the centre, we made nuisances of ourselves. Still, we could get no further than the mental block of “cable theft”. Then, by chance on glorious Saturday last, my parents found a technician driving up and down the street. He was looking for us, but could not find the house because they’d given him the wrong number at the office. (If they had not seen him, we’d probably still be waiting in silence and despair. Seriously.) He was an underground cable guy and he was there to fix all of our problems. He had a look (while my father watched him like a hawk – probably scared he’d run for the hills and leave us to die) and pronounced that the fault was not in the underground cables and the cable theft was not affecting us (and proving my father right and me wrong in the process), but that was okay, because he could still fix it. So he did. *cue choir of angels going ah-hah-haaah-haaaaa*

Seriously, this story should be a movie. 😉

Then I thought all of my frustrations were over. One of my biggest annoyances about no internet was that I’d paid for a month of Runescape membership and now I could not access it as the internet died at the end of January. So, once my father finished freaking out over his millions (40) emails, I let my laptop update my Java to Java 7, which it had been nagging me to do for a month, and then I thought I’d play RS. Nope. Not loading. Not working. More frustration… I checked tech support and found out that my firewall was now blocking Java and the game could therefore not load. I followed all of the tutorials to add an exception to my suddenly-overeager firewall (which took two days) and thought that finally I would be able to play. Nope. Not working. Not loading. I googled the error message, found out that the wonderful new Java 7 can cause problems with some firewalls, promptly downloaded Java 6 again and now the world is all good again. I played Runescape all afternoon. The computer can nag me every day for the rest of the year to update Java, but I’m not caring. At least, not until Oracle fixes the firewall problem.

So there you have the long-winded tale! Now, if you’ll excuse me, I have to finish reading A Midsummer Night’s Dream before tomorrow afternoon, or I’m going to look a real idiot in class. Obviously I’m not finished yet, because internet. I’m having a lot of trouble with my reading at the moment. The Faerie Queene is also driving me crazy and that is not only because of the overdose of e’s in the spelling. It’s really hard to read, for me at least. The story is great, but not the spelling…

This entry was posted on February 20, 2013 by Elana. It was filed under Cartoons and was tagged with call centres, cartoon, frustration, funny, how-to, humor, irony, procrastination, sarcasm.