Welcome to the first post where I am not going to draw anything or share a short story with you, but rather write about how I write. Remember I said I wanted to start sharing more of this, something which I only got a taste of during NaNoWriMo?

This post was inspired by something that I read over on Bethie’s HASH. She is busy with a writing challenge on different questions (Check it out, it’s really interesting if you are a writer!). The one that matters now was the one about writing and music with the question:

Do you listen to music while you write? What kind? Are there any songs you like to relate/apply to your characters?

I was obviously all hugely excited by this post and eventually Bethie convinced me to make one too. So now I’m doing it. And probably blaming it on her as well.

(This is going to be long.) 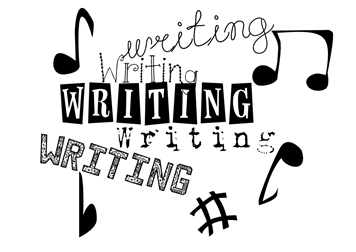 I am also not the only one who feels this way, and neither am I the only one that begins to hear stories in music. One of my favourite authors, Diana Wynne Jones, said,

The Magicians of Caprona was odder than most, because I heard a piece of music and thought, ‘That ought to have words,’ and the story came into my head as I thought it.

I tend to pick what I listen to by need and theme, rather than any other reason. And I’ll admit it: I don’t like conventional, modern music. There will be the occasional pop song that I like and also the occasional rock number. But in general, I don’t like having to listen to those things. What I do like, is soundtracks. I’m crazy about the things actually. I believe that soundtrack-music plays such a large role in any theatre experience (it builds everything from emotion to tension) that it should get more recognition than it does. The only part of the Academy Awards that I am really interested in is the Oscar for Best Soundtrack. I remember being furious at the judges’ choice last year.

Thus, this means that the title of this post has a double meaning: not only does the music serve as a soundtrack to my writing, the music is also a soundtrack in its own right. And yes, before someone points this out to me in the comments, I do know that the correct term for the music to a film is “score”. I just don’t like that word. It’s not descriptive.

Though soundtracks do make up the majority of what I listen to at any time, not just when I’m writing, I do listen to other things as well. I like a bit of instrumental metal sometimes and also some folk (don’t judge). Also, I like to listen to trailer music, which is even more of a niche market than soundtracks. It is similar to soundtracks in that it is used in films (mostly only their trailers, hence the name) and commercials to create a mood, but different that they do not come in a series that, as a whole, tell an entire story. Trailer music is like a snippet out of a bigger story and I like it, because I can fill in the rest with my writing.

I listen a lot to the Lord of the Rings soundtracks (my favourite), How to Train Your Dragon, Harry Potter (especially the final soundtrack), the Tangled soundtrack and The Three Musketeers soundtrack.

Now… on to the specifics!

The first time that I actually started connecting certain tracks with writing and actually made a point of noticing that I did this, was during the first time that I did NaNoWriMo. That was when I set myself the challenge to do it at another time of year, because I could not make it in November: thus June/July 2010. The novel that I wrote during this time (and still have not finished) was dramatic, overly dramatic, satirical and verbose. I’ll tell you more about it someday, when it makes more sense to me.

Anyway, it was also during this time that I found an album by Two Steps From Hell, a production company that specializes in trailer music, Illumina. Then I went on and listened to it a lot.

Therefore there will always be a couple Illumina tracks that I will forever associate with writing:

I love you forever

The good news is… that that was not all that I listened to. There was one certain track that I used to write a death scene. What was it? Oh yes:

But enough about this novel. There are quite a few more tracks that I associate with it, most notably Believe and Ashes of War, but let’s move on.

During one of my other novelling adventures, which I named Arcana for the lack of better ideas, I never realised how much I based the ending of my story off one of the songs that I listen to so much: Send Me a Song, by Celtic Woman. I believe it is sung by Lisa Kelly.

Without telling you the entire plot (which I still have not written the middle of), it was roughly a story about music and the awkward relationship between a girl and her boy friend (emphatically two words). There was lots of music and he broke the law. For which he was banished. So yes, if you listen to the lyrics of that song, you’ll hear another story very much like it. I only realised what I did much later!

My latest escapade into the world of music and writing was, of course, during NaNoWriMo 2011. This was certainly the story that was most influenced by music, of any of those that I had written. You see, I got my idea for the plot when listening to Now and Then by Blackmore’s Night. When I heard the lyrics, especially the bit that said “I’ll heal in time”, I knew I was going to write a cross between historical novel and science fiction, telling the story of a girl going time-travelling to make sense of the death of her husband. Snapshots of Time was born.

Whilst I was writing this novel, I listened to whatever was on hand and had a fast beat. I would do anything that could make me type faster, because I only had an hour each day to write, and I was trying to do 1,800 words every time. It was a challenge. I went through quite a lot of the Harry Potter soundtracks in that time. It kept me going. I have the complete collection, 1-8. I listened obsessively to Weasley Stomp, because it was the fastest track from it that I could find.

When things were a little calmer in NaNo land, I turned to Tuck Everlasting. I have never even watched this show, but the soundtrack reminds me of open fields and buttercups. Why buttercups I don’t know, because I’ve only ever seen a few in my life. I wouldn’t know why I have an association with the things!

When my novel turned sadder, I also had my go-to tracks. Schindler’s List of course remains one of the ultimate tracks, and then there were also things like Hymn to the Fallen, out of Saving Private Ryan.

I should really stop now with this post. It has gotten completely out of control! I won’t even get started on favourite composers!

I hope everyone who read this far enjoyed it in its pictureless-state. You’d better. You’ve no idea how long it took me to write this thing!

This entry was posted on February 3, 2012 by Elana. It was filed under Meta-writing and was tagged with metawriting, music, nanowrimo, story, writing.